You are here: RTI Wiki » Right to Information Guide » Guidelines for RTI Applicant » Second Appeal » How to file a Complaint to CIC

How to file a Complaint to CIC

RTI Act confers right to access to information held by a Public Authority on all Citizens. The Act also prescribes remedy, when such a right is denied to a citizen.

When an applicant do not receive a decision on his RTI Request within 30 days or is aggrieved by the decision, applicant can prefer an Appeal under Section-19(1) and further appeal under section-19(3) before the Information Commission within time limit. In such an appeal, the applicant can seek relief to supply information by PIO.

What is the difference between a Complaint and Appeal

A second appeal under section 19 (3) of the Act is filed against an order of the FAA in a public authority or when the FAA does not make a decision within the specified time. A complaint under section 18 of the Act may be filed directly on the grounds mentioned in sub-section (1) of this section. The main difference between a complaint and a second appeal is that in the case of an appeal, this Commission may pass orders directing the CPIO to provide the requested information to the appellant in appropriate cases whereas such orders cannot be passed while dealing with a complaint. 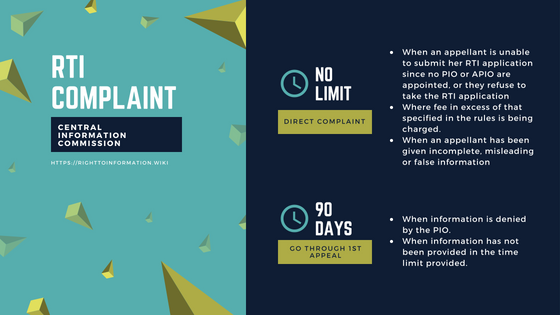 In which cases complaint can be filed

Section 18 (1) provides for making complaints to the Information Commission in the following circumstances:

For 2) and 3) above a provision for a first appeal is also there as per Section 19. These cases apply to the first appeal under section 19 since it applies to both non-decisions and any decision of a PIO.

Most Commissions do not entertain an appeal in this matter until the first appeal has been made.

Hence, it would be a good practice for appellants to file complaints to the Commission for matters covered by 1), 4), 5) and 6) and file first appeals for 2) and 3).

When an applicant is denied access to information by various reasons specified in Section-18(1), Applicant can file Complaint directly before the Information Commission.

Under the complaint proceedings, the Information Commission cannot direct PIO to supply information, but can only conduct an inquiry and impose a penalty on PIO or recommend disciplinary action against PIO, for the reasons as enumerated under Sec-20.

When an information is denied without any reasonable cause, the applicant is entitled to invoke both the remedies - Second Appeal as well as Complaint. Sections 18 and 19 of the Act serve two different purposes and lay down two different procedures and they provide two different remedies. One cannot be a substitute for the other.

When to file a Complaint

The Commission has decided to issue the following guidelines for registration of Complaint as prescribed under Rule 8 and 9 of the RTI Rules, 2012:

Documents required for registration of Complaint

Other documents required for proper presentation of a complaint, if available

Registration of Complaint as second appeal

In case of offline Appeal/Complaint filed by the applicant, he/she will be informed by the dealing official whether the same prime facia fulfils the requirements for its registration.

Additional guidelines for facilitating disposal of the case:

Is a complainant or an appellant entitled to priority in hearing cases?

The complaints and second appeals filed in this Commission under the RTI Act are taken up for hearing in chronological order. However, the Commission in a particular matter may decide to accord precedence depending on the facts and circumstances of the case.

Generally how much time is taken by the Commission in deciding a complaint/appeal?

Receipt of second appeals/complaints is a continuous process and they are disposed of as expeditiously as possible. The complaint/appeal is taken up as per its turn. A priority hearing is accorded in a particular case or class of cases as per orders of the Chief IC/IC concerned. A complete list of pending cases of Chief IC/ each IC is available on the website of the Commission. Cause List indicating the date of hearing of the cases is also available on the website of the Commission.

Can a second appeal or a complaint be filed in this Commission electronically?

Yes, a second appeal or a complaint can be filed electronically on www.cic.gov.in online along with the requisite documents as per RTI Rules, 2012. The documents must be duly signed/ self-attested/ verified before scanning and attaching with the appeal or complaint being filed.

Can a complaint be filed directly before this Commission? If yes, the grounds on which a complaint may be filed?

Yes, a complaint may be filed directly in this Commission under section 18 of the RTI Act, by a person:-

(b) who has been refused access to any information requested under this Act;

© who has not been given a response to a request for information or access to information within the time limit specified under this Act;

(d) who has been required to pay an amount of fee which he or she considers unreasonable;

(e) who believes that he or she has been given incomplete, misleading or false information under this Act; and

(f) in respect of any other matter relating to requesting or obtaining access to records under this Act.