What is Right to Information 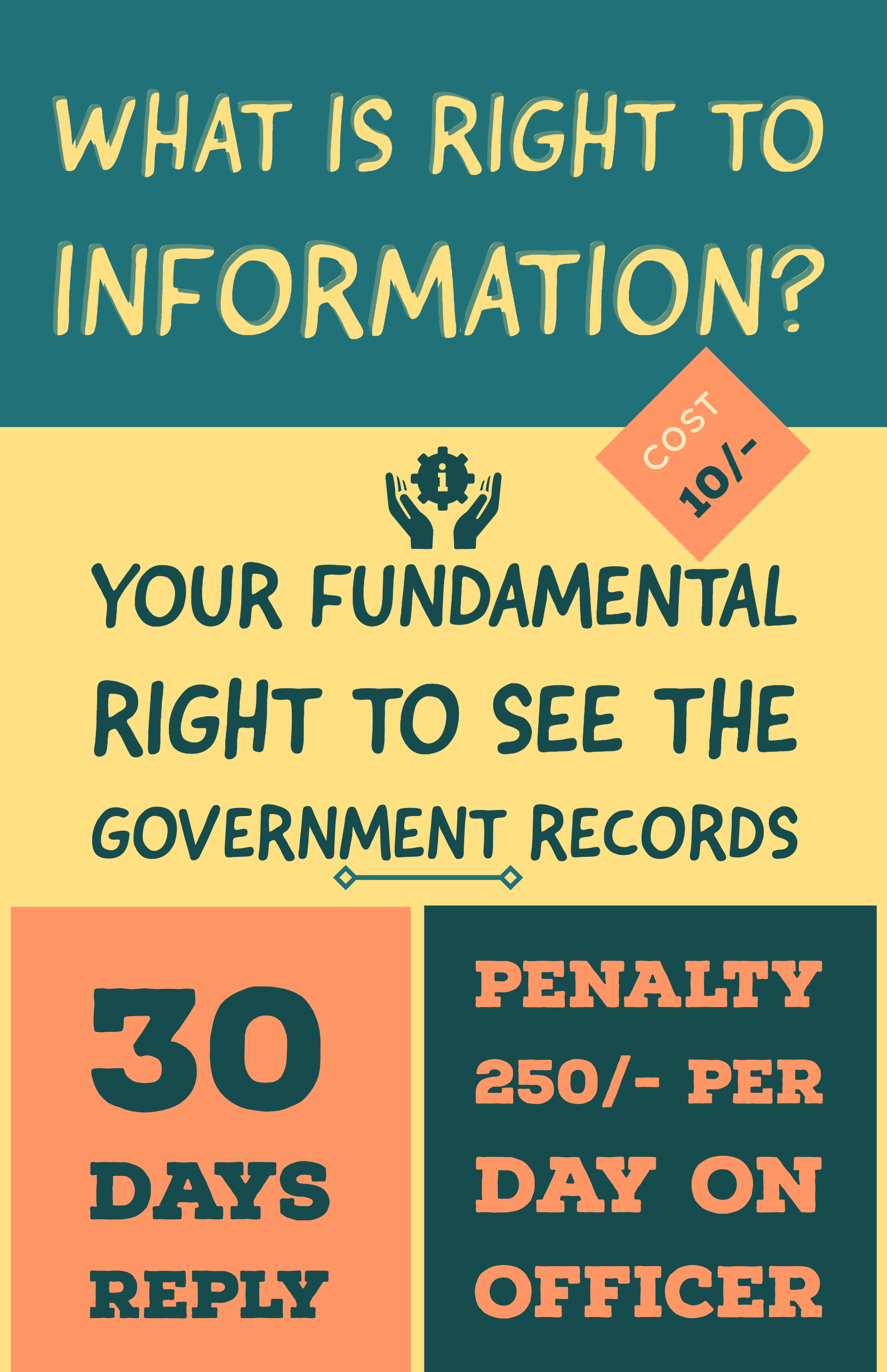 Right to Information is a part of fundamental rights under Article 19(1) of the Constitution. Article 19 (1) says that every citizen has freedom of speech and expression.

Even though RTI is a fundamental right, still we need RTI Act to give us this right. This is because if you went to any Government Department and told the officer there, “RTI is my fundamental right and that I am the master of this country. Therefore, please show me all your files”, he would not do that. In all probability, he would throw you out of his room. Therefore, we need a machinery or a process through which we can exercise this fundamental right. Right to Information Act 2005, which became effective on 13th October 2005, provides that machinery. Therefore, Right to Information Act does not give us any new right. It simply lays down the process on how to apply for information, where to apply, how much fees etc.

The basic object of the Right to Information Act is to empower the citizens, promote transparency and accountability in the working of the Government, contain corruption, and make our democracy work for the people in real sense. An informed citizenry will be better equipped to keep necessary vigil on the instruments of government and make the government more accountable to the governed.

The Schema of RTI Act

The Parliament recognized that proper and efficient functioning of a democracy requires an informed citizenry and transparency of information and that such transparency is vital for checking corruption and to hold governance and their instrumentalities accountable to the citizen of the country. The Parliament was also conscious that random and uncontrolled revelation of information is likely to conflict with other public interests including efficient operations of the governance, optimum use of limited fiscal resources and preservation of confidentiality of sensitive information.

In its endeavour to balance out and harmonize these conflicting interests while preserving the paramountcy of the democratic idea, the Parliament enacted the RTI Act. The object of the RTI Act is to set out a practical regime of right to information for citizens to secure access to information under the control of public authorities, in order to promote transparency and accountability in the working of public authorities.

Sec. 4 of the Act imposes an obligation on public authorities to maintain its records duly catalogued and indexed in a manner and form which facilitates the right to information under the Act.

Sec. 6 of the Act entitles a person desirous of obtaining any information under the Act, to make a request in writing to the Central or State Public Information Officer specifying the particulars of the information sought by him. The applicant is not required to give any reason as to why he is requesting for the information.

Sec. 22 of the Act is a non- obstante clause giving overriding effect to the provisions of the Act.

Under Sec. 25, the Information Commission is required after the end of each year to prepare a report on the implementation of the provisions of the Act during that year and forward a copy thereof to the appropriate Government.

What you can do with RTI?

Under the provisions of the Act, any citizen may request information from a “public authority” (a body of Government or “instrumentality of State”) which is required to reply expeditiously or within thirty days. The Act also requires every public authority to computerise their records for wide dissemination and to proactively disclose certain categories of information so that the citizens need minimum recourse to request for information formally. This law was passed by Parliament on 15 June 2005 and came fully into force on 12 October 2005.

Right to Information includes the right to: Inspect works, documents, records. Take notes, extracts or certified copies of documents or records. Take certified samples of material. Obtain information in form of printouts, diskettes, floppies, tapes, video, cassettes or in any other electronic mode or through printouts. “information” means any material in any form, including records, documents, memos, e-mails, opinions, advice, press releases, circulars, orders, logbooks, contracts, reports, papers, samples, models, data material held in any electronic form and information relating to any private body which can be accessed by a public authority under any other law for the time being in force.

“record” includes: a) Any document, manuscript and file b) Any microfilm, microfiche, and facsimile copy of a document c) Any reproduction of image or images embodied in such microfilm (whether enlarged or not); and d) Any other material produced by a computer or any other device;

Right to Information entitles the applicant to the inspection of work or documents and records. It also entitles an applicant to take notes, or ask for extracts, or certified copies of any records. Since the word extracts is mentioned it would mean that the applicant is entitled to get an extract of the records sought by him. This would, however, be subject to the provision in Section 7(9). If the information is in digital form the information could be requisitioned and provided in appropriate electronic format.

At times, there may be a need to find a small amount of data in a broad range of records. In such a scenario, it may be expensive and wasteful to give photocopies of all and therefore more efficient to allow the person to search it through a request for inspection of files. The applicant could mention in the Right to Information application for inspection that she will also take copies of certain documents at the time of inspection. The officer offering records for inspection should ensure that the applicant is informed of the file numbers. The files should be indexed and numbered as per the requirement of Section 4(1)(a). As a practical measure, the PIO could also offer three dates to an applicant for inspection.

Who is covered under RTI?

The Central RTI Act extends to the whole of India except the State of Jammu and Kashmir. All bodies, which are constituted under the Constitution or under any law or under any Government notification or all bodies, including NGOs, which are owned, controlled or substantially financed by the Government are covered.

Why RTI is a success?

This is because, or the first time in the history of independent India, there is a law which casts a direct accountability on the officer for non-performance. If the concerned officer does not provide information in time, a penalty of Rs 250 per day of delay can be imposed by the Information Commissioner. If the information provided is false, a penalty of a maximum of Rs 25,000/- can be imposed. A penalty can also be imposed for providing incomplete or for rejecting your application for malafide reasons. This fine is deducted from the officer’s personal salary.